In my 34 years as a LORD engineer, the last 8 years being devoted to shock and vibration applications, I feel that I’ve seen and heard it all!  During my tenure, I cared a lot about safety and stressed the importance of using vibration mounts that incorporate a “safetied” feature, as should you.

A couple of years ago, Tim, from our LORD Erie Plant Maintenance Group, stopped by my desk. He was hoping I would be able to help him with an equipment issue in one of the new conference rooms. Tim led me to a conference room where he had a ceiling projector turned on that was projecting a slide onto the wall. He asked what I thought of the projected image as it was a little shaky and difficult to focus upon. Tim proceeded to go through a couple more slides. Due to the shaking, the words were blurry and extremely difficult to read. It was obvious that there was a disturbance in the ceiling where the projector was mounted. Tim stated some of the people who used this projection system even complained of having a headache. 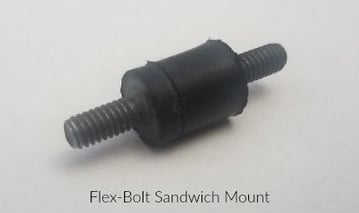 My solution was to find three LORD SMB003-0100-2 Flex-Bolt Sandwich Mounts, which I just happened to have in mycollection.  I passed them along to Tim and he then installed them between the projector and the ceiling.

Later that day Tim called me back to the conference room and reported the rubber mounts seemed to have solved the problem. The slide displayed on the wall was no longer shaky and looked perfectly normal. Although Tim was satisfied with the solution, I knew we weren’t quite done. We still needed to make the mounts safetied. I explained to Tim that it’s only the vibration mount’s rubber that supports the entire weight of the projector.  From a safety standpoint, we need to make sure that if the rubber should tear, the projector will not fall. Well, that made sense, and Tim said he had an idea about how to make the unit safetied. When I returned to the conference room the next day I looked up and was happy to see that Tim added three loosely-fitted nylon straps to act as a safetied feature. In fact, the mounts are still functioning today without any issues.

Click the link below to view product info from the LORD catalog:

So, What Determines if a Mount is “Safetied”?

Well, that’s easy! The simple answer is making it so the mount will stay somewhat intact if the rubber in the mount should ever fail. This can be achieved in uncomplicated ways, such as with straps similar to those used by Tim or by proven methods that LORD has used throughout the years. Incorporating a saftied feature should always be a consideration of every design. How this is accomplished depends on the type of mount used in a particular application.

Aside from LORD Flex-Bolt Sandwich Mounts, which need individual consideration, all LORD industrial mounts can be saftied either by using washers as part of their installation or by their inherent design.

Let’s examine the various ways to incorporate a saftied feature in the mount you’ve chosen for your design.

In most mount installations, LORD recommends using a steel washer on each side of the mount. This is the case for LORD Plateform Mounts, Center Bonded Mounts, Conical Mounts, Two-Piece Mounts and Grommets. In these cases, the washers serve several purposes. The washer on the top surface of the mount distributes the load uniformly across the mount. This reduces the chance that the entire load supported by the mount is not solely supported by the steel inner member of the mount.

The washer on the bottom side of the mount is there to distribute rebound loads caused by shock disturbances and limit mount travel in the rebound direction. It is important to properly install the washers as the mount could be damaged if the entire mount load is placed only on the metal inner member of the mount. 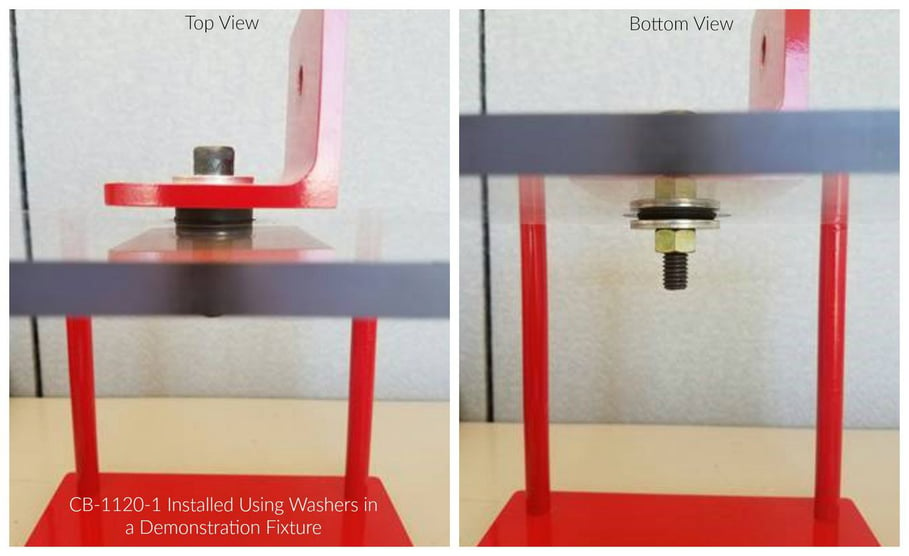 I had the pleasure of dealing with a customer who kept sending damaged LORD plateform mounts back to me and telling me the mounts were no good. I had him send photos of his installation so I could see if the vibration isolation mounts were properly installed. While reviewing the photos I immediately noticed that washers were not being used. This was allowing much more than the recommended amount of mount travel during operation and consequently tearing the mounts prematurely.  I explained to the customer that he needed to use washers on the top and bottom. He added them and the tearing issue went away. 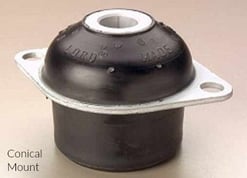 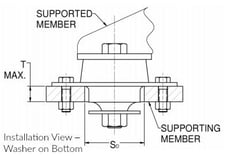 isolator mounts. The washers will provide a safetied feature in the case that the rubber in the mount becomes damaged. The washers on each side of Plateform Mounts, Center Bonded Mounts, Two-Piece Mounts and Grommets are larger in diameter than the installation hole diameter of the mount or, in the case of conical mounts, larger than the inside diameter of the outer member. The washers would need to deform and pull through the mount installation hole of the outer member in order to free the component being isolated. This prevents the component being isolated from becoming a projectile and possibly causing damage to surrounding components or even injury to the operator or people in the vicinity. 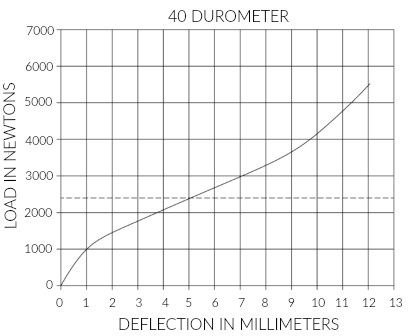 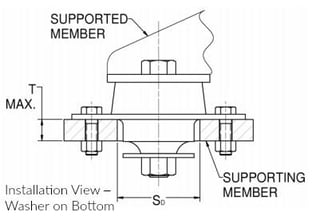 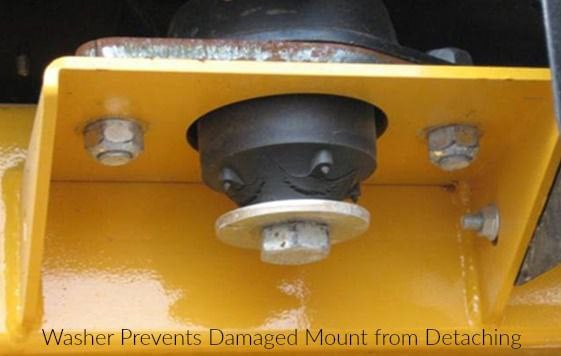 A LORD Bushing, which is designed to carry loads in the radial direction, does not require any washers at all in their installation. The manner in which a bushing is installed provides the safetied feature. In a normal installation the outer diameter of the bushing, which is steel for bushings with outer members and rubber for bushings without outer members, is pressed into a housing and the steel inner member is retained by some sort of clevis with a bolt or pin, which provides a safetied feature. 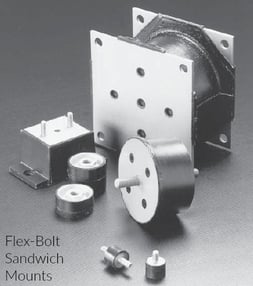 Some general uses for Flex-Bolt Sandwich mounts include drums for vibratory compactors, shipping containers, and electronic cabinets and components. An external safetied method must be considered when using sandwich mounts. As in the ceiling projector example noted above, it was important to provide a safetied feature to protect against the possibility of injury.

In the case of vibratory compactors, a safetied feature is normally not used. The mounts in this case are visible and the operator will feel a gradual degradation in performance if the mounts should become damaged. The vibration isolators are normally changed before they would totally fail.

Check out the video below to more about the engineering behind industrial vibration isolators:

Photos are courtesy of LORD Corporation.