Understanding the adverse effects of vibration, shock, and noise disturbances is the first step in selecting an appropriate isolation solution. Problems range from simple annoyances to the more serious complications of shortened equipment life and especially safety.

Vibration control is a precise science, which follows logical and physical laws.

A clearer understanding of this will promote a more efficient application of its principles and techniques and improve overall engineering competence wherever products are exposed to hostile dynamic environments. 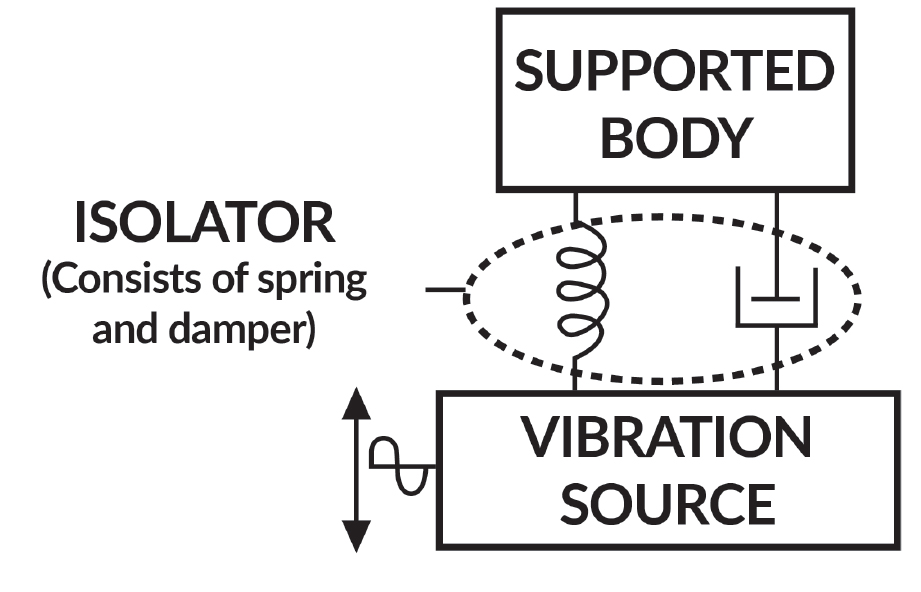 Vibration definition is explained as an oscillatory motion. Any body with mass and elasticity can vibrate. The simplest type of vibrating systems is called a single-degree-of-freedom spring-mass system. The spring is characterized by its spring rate and a mass.

This system is called a single-degree-of-freedom system because motion can occur in only one direction.

All single-degree-of-freedom problems can be classified into two groups:

In the first case the mass moves because of the vibrating force. This causes a deflection across the spring which transmits a force to the structure. This force must be reduced.

In the second case the vibrating or moving structure causes a deflection across the spring which transmits a force to the supported mass. This causes the mass to move. The motion must be reduced.

What about more complex systems that move in more than one direction? A multiple-degree-of-freedom system occurs when there are two or more coordinates within its motion. Force and motion must be reduced.

Mechanical shock is a nonperiodic disturbance of a mechanical system characterized by suddenness and severity. Such extreme disturbances cause significant forces in the system which may be damaging. A shock input is non-repetitive in nature and of limited time duration. The response it produces normally decays to an arbitrarily small value before the next disturbance.

Analysis of a shock problem usually starts with an examination of the shock input. Often these short-duration transient loads have complex wave shapes. Analysis may be simplified by comparing the actual wave shape to several simple wave shapes for which the response is known. Important features of the shock pulse are maximum amplitude, time duration, and approximate shape. The majority of excitations typically encountered are:

There are a number of terms and definitions which should be understood with regard to vibration and shock theory.

Acceleration is the rate of change of velocity with time, usually along a specified axis and usually expressed in “G” or gravitational units. It may refer to angular motion.

Amplitude is the maximum displacement from its zero-value position.

Compression when specified as a direction for loading is a deformation caused by squeezing the layers of an object in a direction perpendicular to the layers.

Damping the mechanism in an isolation system dissipates a significant amount of energy. This mechanism is important in controlling resonance in vibratory systems.

Disturbing frequency is the number of oscillations per unit time of an external force or displacement applied to a vibrating system.

Durometer (hardness) is an arbitrary numerical value, which measures the resistance to the penetration of the durometer meter indenter point; value may be taken immediately or after a very short specified time.

Fragility is the highest shock or vibration level that can be withstood without equipment failure.

“G” Level is an expression of the vibration shock acceleration level being imposed on a piece of equipment as a dimensionless factor times the acceleration due to gravity.

Isolation is the protection of equipment from vibration and/or shock. The degree (or percentage) of isolation necessary is a function of the fragility of the equipment.

Load deflection curve is the measured and recorded displacement of a mounting plotted versus an applied load.

Natural frequency is the number of cycles (expressed as Hertz or cycles per second) at which a structure will oscillate if disturbed by some force and allowed to come to rest without any further outside influence.

Random vibration is a non-sinusoidal vibration characterized by the excitation of a broad band of frequencies at random levels simultaneously.

Set is the amount of deformation never recovered after removal of a load. It may be in shear or compression.

Shear when specified as a direction for loading is a deformation caused by sliding layers of an object past each other in a direction parallel to the layers.

Shock pulse is a transmission of kinetic energy to a system, which takes place in a relatively short length of time compared to the natural period of this system. It is followed by a natural decay of the oscillatory motion. Shock pulses are usually displayed as plots of acceleration vs. period of time.

Spring rate is the force required to induce a unit deflection of spring. A steel spring has a very linear relationship between force and deflection. Elastomeric springs may or may not be linear depending on the amount of deflection due to the load.

Static deflection is the deflection of the isolator under the static or deadweight load of the mounted equipment.

Transmissibility is a dimensionless unit expressing the ratio of the response vibration output to the input condition. It may be measured as motion, force, velocity or acceleration.

Parker LORD offers a full range of sophisticated materials and products that with  the proper application will allow products to operate more smoothly and quietly; less disturbing to surrounding equipment and personnel; less susceptible to damage; and less expensive to make.

From vibration management systems to Parker LORD's high-performance rubber-to-metal vibration couplings, Parker LORD's Innovation, research, and expertise they feature a wide range of products to meet most applications as well as custom-designed vibration isolation system. This paper has been prepared to offer information needed to select and use rubber mounts, explain terms and definitions, understand theory, and deliver data for standard mounts. 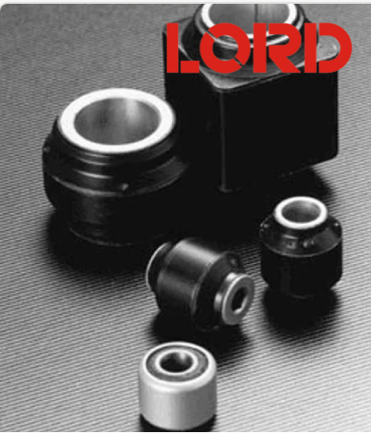 Used in applications where the absorptions of shock, attenuation of noise, reduction of wear, and elimination of lubrication are required.

Easy to install, the uncomplicated designs of the center-bonded and square-bonded bushings provide initial economy, while the rugged elastomers and high strength bonding assures extended service life with minimal maintenance.

Center bonded mounts are used in applications to isolate vibration, control shock, and reduce noise due to structure-borne vibrations. Available in a full range of rated load capacities and able to withstand shock loads of 10 g’s, these equipment mounts protect and improve operator comfort. They are ideal for automotive, marine, railroad and other industrial applications. 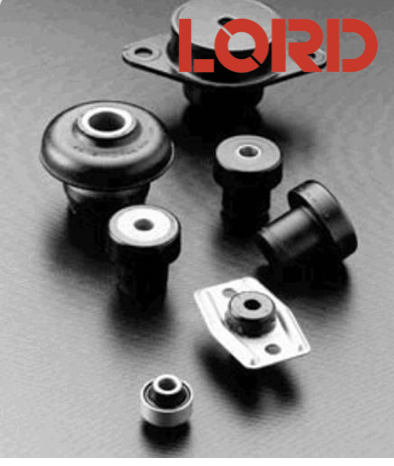 These easily installed ring-type couplings were developed to overcome numerous torsional problems associated with vehicular and industrial driveline systems. They reduce the transmission of noise and increase bearing and driveline life through greater misalignment accommodation, isolation of low frequency disturbance, and isolation of torsional shock.

The highly flexible elastomeric couplings for accessory drives are also designed to eliminate lubrication and maintenance.

Parker LORD Flex-Bolt™ Sandwich Mounts are designed to protect equipment and machinery against damaging vibration. This family of mounts has excellent capacity for vibration energy control. 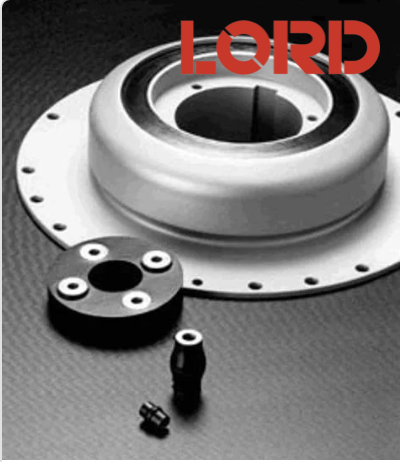 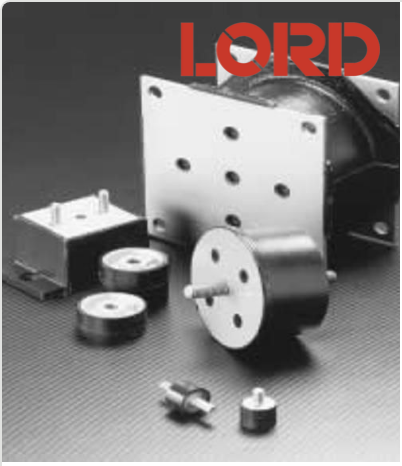 Grommet isolators are designed and produced with the same type of precision and care as our high-performance bonded elastomeric mounts. This provides close control of stiffness and dimensions.

Made of neoprene and natural rubber provides close control of stiffness and dimensions. They also provide good vibration isolation for disturbing frequencies above 30 Hz.

Two piece-mounts are designed for applications involving severe dynamic forces in the static load direction, as well as the rebound direction. Travel is limited in both directions by rubber in compression which provides snubbing.

These mounts are designed to support engines, cabs, and accessory units and accommodate frame racking and twisting while isolating vibration and absorbing shock.

Lattice mounts are recommended for applications where disturbing frequencies are as low as 6 Hz. Their lattice design provides a soft vertical spring rate combined with lateral stability.

Parker LORD plateform mounts provide effective isolation against vibration. The contour of the flexing element was developed to provide uniform stress distribution. This, plus high strength bonding and the use of specially compounded elastomers provides maximum service life.

These versatile mounts are available in three types, each type featuring square, diamond or holder configurations to suit a variety of design requirements. 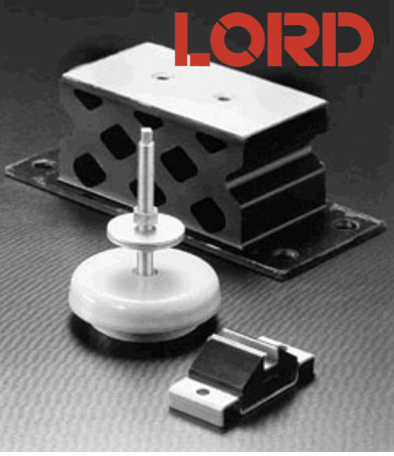 The three types, plateform mounts, heavy-duty plateform mounts and multiplane mounts, offer a range in load ratings from 0.5 to 600 pounds. Snubbing washers provide an interlocking system of metal parts which act to prevent damage from overload or excessive shock impact. 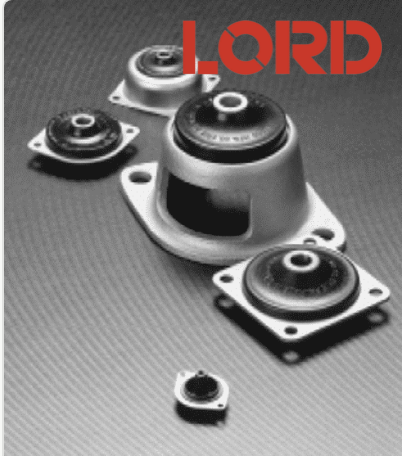 Designed for sensitive electronic systems, Parker LORD Micro-mounts™ are capable of isolating electronic components and other light-weight electronics from shock and vibration.

Micro-mounts can be used as a stand-alone solution or to augment performance of a Parker LORD full-system isolation solution. The small, flexible mounts are used successfully on GPS oscillators in satellites, military aircraft, downhole oil and gas equipment, and many more applications.

Made of Broad Temperature Range (BTR®) silicone bonded to stainless-steel, these miniature mounts are ideal for applications requiring consistent performance at extreme temperatures. The combination of this unique high-end silicone with stainless steel components assures easy installation in a wide range of applications.

How to select a vibration isolator

There are a number of critical pieces of information necessary to understand when choosing the appropriate isolator for a particular application. Some items are more critical than others, but all should be considered. 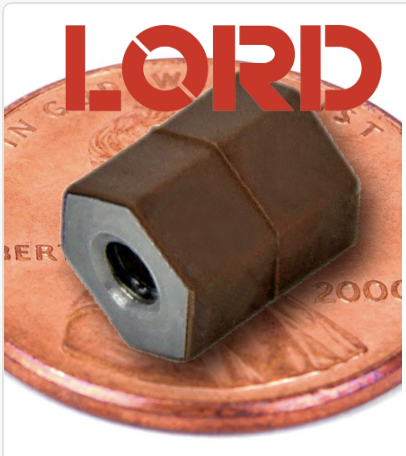 One of the many benefits of being a Parker LORD Channel Partner is access to Parker LORD’s engineering support, their fully accredited test lab, and extensive design/analysis software capabilities. This computer capability, as well as specialized programs for analyzing engine/transmission combinations provides output to optimize performance over the complete range of operating speeds. Information needed to perform the analysis to facilitate design decisions using appropriate solutions includes:

There is one more thing to cover and that is understanding the importance of safety.

Yes, you can solve the vibration or shock with an isolator but sometimes the job does not stop there. Is the mount “safetied”? When the vibration mounts are the only thing supporting the entire piece of equipment, it’s crucial to ensure that the mount and/or the piece of equipment is secured by straps, webbing, washers, or other means to provide a “safetied” feature in the case that the rubber in the mount becomes damaged. 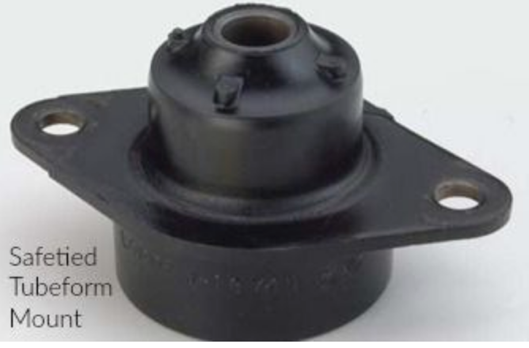 Sometimes the “safetied” feature is inherent to the mount as in the case of a Parker LORD safetied tubeform. These are designed to carry loads in both the axial and radial direction and uses only one washer on the bottom side.

Well, as you can see there is a lot to know about vibration isolation and shock absorber; therefore, we recommend that you don’t go far without us!

It is always a smart decision to reach out to our vibration isolation experts to advise you while developing your design. Our engineers offer experience and expertise to help you determine potential vibration issues during product development and, more importantly, before the vibration issues actually occur in the field.

Are you experiencing vibration problems with products already deployed? Then it’s time to give us a call. With over 40 years of experience, we’ve likely seen it or solved it.

As a trusted Parker LORD channel partner for over 25 years, together Parker LORD and Modus® bring engineering and problem-solving skills directly to our customers. Use our expertise to help you specify appropriate high-performance rubber-to-metal bonded vibration isolators. Modus® adds further value by stocking the parts in Livermore, CA for immediate delivery! You can count on us so your customers can count on you.